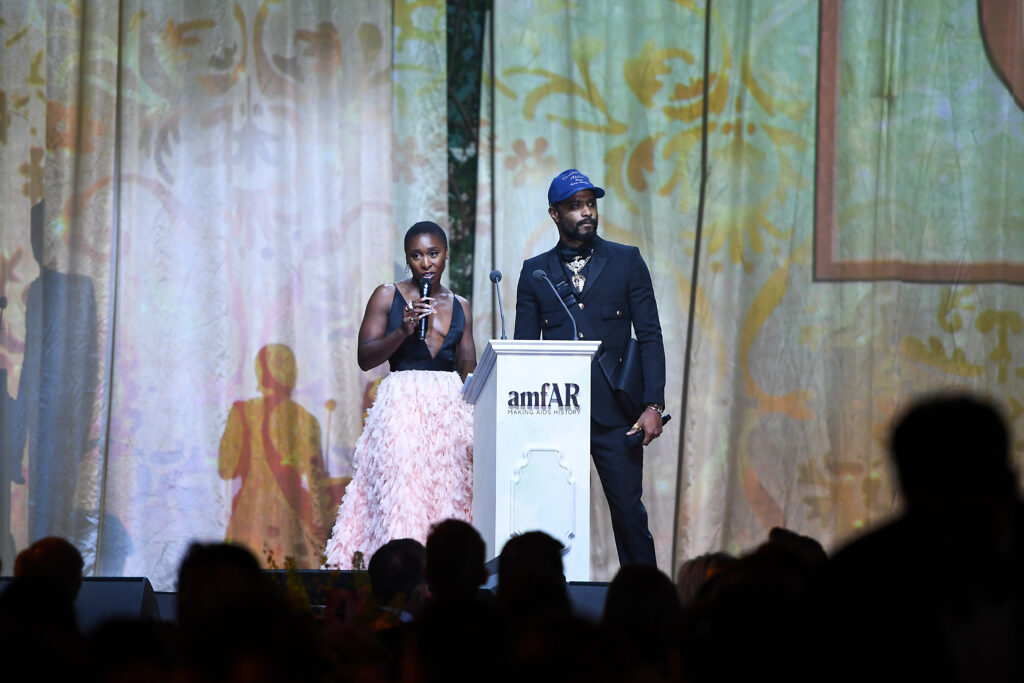 Over $19 million was raised for amfARs HIV/AIDS research programs last night, at amfAR Gala Cannes, at the fabled Htel du Cap-Eden-Roc. Legendary actor, director and producer, Robert de Niro, was the guest of honor at the event. The black-tie evening included a dinner, a live auction of luxury one-of-a kind items and contemporary art, a fashion show, and spectacular performances by Christina Aguilera, Ricky Martin and Charli XCX.

The guests were also treated to a surprise performance by Matteo Bocelli, who helped raise over 2 million euros in the auction with the sale of two private dinners and performances with his father, Andrea, at their family home.

The night opened with an energetic performance by Grammy-winning Latin pop icon, Ricky Martin, who got the crowd dancing early, with two of his hit songs Mara (Un, Dos, Tres), and Livin’ La Vida Loca. His performance was followed by, amfAR Board Co-Chairs T. Ryan Greenawalt and Kevin McClatchy taking the stage to welcome and thank the approximately 800 guests in attendance for their support. amfAR Cannes event Chairs Cynthia Erivo and Lakeith Stanfield continued to set a tone of generosity for the evening with remarks about the importance of supporting amfARs work as they introduced the auction.

Guests took their words to heart and bid generously and enthusiastically throughout the night in a highly successful auction, led by the remarkable Simon de Pury and supported by amfARs Global Fundraising Chairman Milutin Gatsby.

In between auction lots, Charli XCX kept the energy in the room high with a performance of three of her recent hits. And, the night culminated with an outstanding set by multi-Grammy Award winning artist, Christina Aguilera, who blew away the enthused crowd.

Presenting Sponsors were FTX and Red Sea International Film Festival. FTX was the official cryptocurrency partner for amfAR Gala Cannes. Signature sponsors included Chopard, which donated a unique pair of diamond earrings from the red-carpet collection to the live auction, and Jelenew, which worked with fashion designer Stphane Rolland to create a custom dress that was included in the fashion show. The official beauty partner of the fashion show was Charlotte Tilbury, which provided skincare and make-up products and professional make-up artists for the fashion show. Revolve, in association with The h.wood Group, was amfARs after party host.

About amfAR  amfAR, The Foundation for AIDS Research, is one of the world’s leading nonprofit organizations dedicated to the support of AIDS research, HIV prevention, treatment education, and advocacy. Since 1985, amfAR has invested nearly $617 million in its programs and has awarded more than 3,500 grants to research teams worldwide. amfAR Gala Cannes has raised a cumulative total of more than $264 million for amfARs lifesaving AIDS research. This extraordinary success has enabled the Foundation to make critical research investments that have brought us within reach of a cure for HIV. The amfAR Gala Cannes was produced by Andy Boose/AAB Productions.

If you're looking for luxury and diamonds, Gossip Stone TV's episode 3 of The...
NEWS

Gossip Stone TV is the destination to get an exclusive look into the lives...

If you're looking for luxury and diamonds, Gossip Stone TV's episode 3 of The...